Video montages are widely used in Dynamo to show in a single montage part of a stream of data. The user can slide on the subset of the data that is represented at a given moment. Examples of this are found in the slider GUIs used to explore sets of particles, slices inside a given volume, or selections of gold beads.

In this page, we explain how to use the underlying Dynamo objects to create your own visualization systems. We explain two possible approaches:

Can be defined easily from the command line without definition of further classes.

Advanced method. This method offers full flexibility at the cost of requiring from the user the creation of new classes.

You can use the class mbvid.guis.montages.cells.Inline, that allows inline definition of the action to be computed at each frame. For instance, imagine that you have a set of 1000 vectors, and you want to quickly explore their histograms separately. Let's generate a random data set:.

For 1000 elements, you probably don't want to show them all in a single screen, but rather slide through the data. Thus, we create the object that represents the GUI

we link now this object with the stream of data

My data is a matlab cell array in this example, but you could pass any other object that implicitly defines an stream of data. If you pass, for instance, a volume of dimensions lx x ly x lz, the stream will be defined as a succesion on lz frames.

Now, we have to tell the GUI object what to do on each frame. This is done by defining the method depictorOnAxesFcn to be an inline function of two variables. The first is a dummy variable that represents the content of the stream for a given frame. The second is the graphical axis associated to the frame in the montage. Thus:

Now we are ready to go: 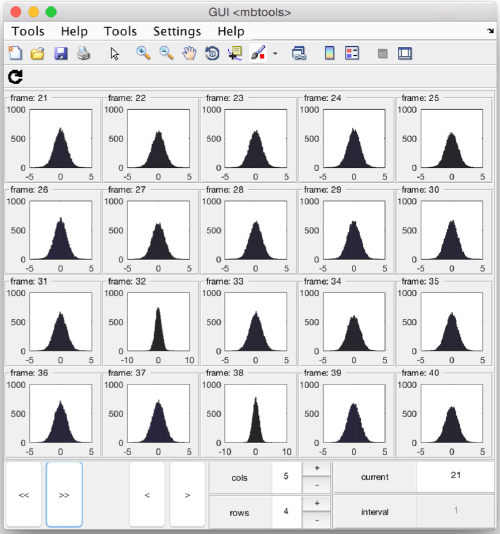 Customized video montage to show the histograms of a cell array of vectors.

Using this options involves a minimal comprehension of Object Oriented Programming. The underlying generic class for video montages is mbvid.guis.Montage.

Basic use of a video Montage object

Showing the GUI of an user-defined subclass myVideoMontage of mbvid.guis.Montage requires first creating the instance

and them invoking the show method:

Before the show operation, there are different options that you can assign beforehand:

Structure of a video montage object

A video montage object is basically the result of combining of two different types of objectc:

This object controls the creation and updating of a frame when its representation is invoked by the scene manager in the videomontage GUI. The basic frame class is mbvid.controls.VideoMontageFrameManager. Custom frame managers need to be subclasses of this class.

Defining the action of a frame

You need to define the method createFrame in your subclass (let's call it myFrameManager). This will pass the properties 'gui' , 'frameNumber', 'hPanel' .

Linking a frame class to a GUI

In order to link a frame class to a particular class of GUI, we can assign the name of the class to the property of the GUI object.

The usual practice is to include this definition in the constructor method of the GUI, to ensure this assignation is ran before the GUI is shown.

In order to create a new class, you can use the usual Matlab system, or just type:

which will open the editor with this predefined content for the class @myFrameManager, created in the current directory.

You can the define the method createFrame() inside this file, using the properties 'gui' , 'frameNumber', 'hPanel' that will be available in the obj during runtime. With

you can find examples across Dynamo that implement this method in different subclasses. In our case, imagine that we want to plot a sine of the -sorted- values of the data contained in each stream entry. Moreover, in this sine we want to use a frequency that changes linearly with the number of frame. This requirement already sets us outside of the realm of inline montages, as we cannot enter the number of frame in the dependencies of the customizing function gui.depictorOnAxesFcn.

Further, for this example we introduce a modification of the plotting axes themselves, making them cover the full panel object, also overcoming the limitation of inlines of type mbvid.guis.montages.cells.Inline. We just provide the class myFrameManager with the method createFrame

You also need to provide and updateFrame, which will be triggered each time we change the scene. This is the actual art of designing video montages and specifically subclasses of frameManager. Here, you should normally provide your class with further properties to store and reuse graphic elements or already available computations, so that they don't need to be recreated each time new frames are generated or recalled.... but in simple applications, you can also avoid over-engineering by simply invoking again the creation of the frame.

but linking it to the type of frame behaviour we just defined:

If we now link the stream of data that we defined previously:

we can now show the video montage: 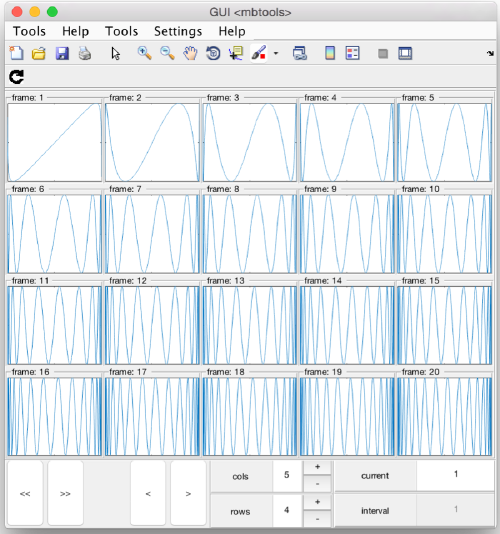 Customized video montage based on the subclassing of the standard frameManager.
Retrieved from "https://wiki.dynamo.biozentrum.unibas.ch/w/index.php?title=Customized_video_montages&oldid=3100"