Difference between revisions of "Walkthrough on manual marker clicking"

Reconstruction of a tomogram implies the availability of a set of alignment parameters that bring the tilt series delivered by the microscopio onto a compatible reference. Fiducial markers can be located using automated methods. In this walkthrough, we describe the tools that Dynamo offers to locate them manually through graphical interaction with the tilt series.

We suggest to follow this tutorial withthe data set from the public EMPIAR database (entry number 10064, data item VPP_tomo4.mrc), which can be accessed through an ftp server:

This GUI is the basic tool for exploring tilt series and annotating on it using Dynamo. It allows to edit manually positions of markers, to fit them to a projection model, and to create an aligned data stack and a reconstruction based on this fitting.

Opening the dmarkers GUI on a tilt series:

It is convenient to first read the tilt series:

and then pass the variable to the gui dmarkers:

here, gui is just a handle to the GUI. This handle can be used on a later point to operate on it. Note that we also need to pass the tilt angles, as they will be needed for fitting a projection model.

The scene gets dragged by moving the mouse while keeping pressed the primary mouse button.

Some micrographs may be defective because of errors during acquisition. They can be markers as invalid by the key x. If you want to undo the marking of a micrograph as invalid, use shift+x.

A three-dimensional gold bead is represented by a trace. A trace is a set of observations, where we call observation to the location of the projection of a gold bead in a given micrograph.

The tool with a black point and a red edge starts the trace initiator. The cursor in the GUI becomes a cross; while this cursor is active, clicking on the screen will create a new gold bead.

To select a gold bead, click on it with the mouse, a green box will appear on the observation corresponding to the selected markers in the current micrograph. Important to add observations into a trace that you have just created, you need to select it, otherwise your next clicks on the screen will be assigned to the trace that is currently under selection.

You can use the arrows to move to the next or previous micrograph after clicking the gold bead.

Additionally, you can connect the click and right or click and left tools. When they are switched on, after a click on the screen, the GUI will automatically move to the next micrograph.

There are two auxiliary GUIs that can be used to control the growth of the traces based as you click the points. The occupancy window updates as a new observation is added into a gold bead, showing the current content of each trace. And additional control shows the content of each trace as new points are clicked inside.

We want to save current set of markers into disk, by using the save to disk option in the Tracks menu. This will create the file Tracks.dms in disk.

Fitting to an alignment model

When you have enough observations, you can proceed to fitting the location of your gold beads to a projection model. The tool with the icon Fit will compute a set of shifts and a single angle psi of rotation for the tilt axis.

In the Fit menu on the GUI, you can find the current error, i.e., the mean residual between each observation and the projection estimated by the fitting model.

Although you will get a lower error value, this might be due to overfitting. Thus, richer parametric models should not be used if you don't have enough markers on each micrograph (in the order of the tens.) 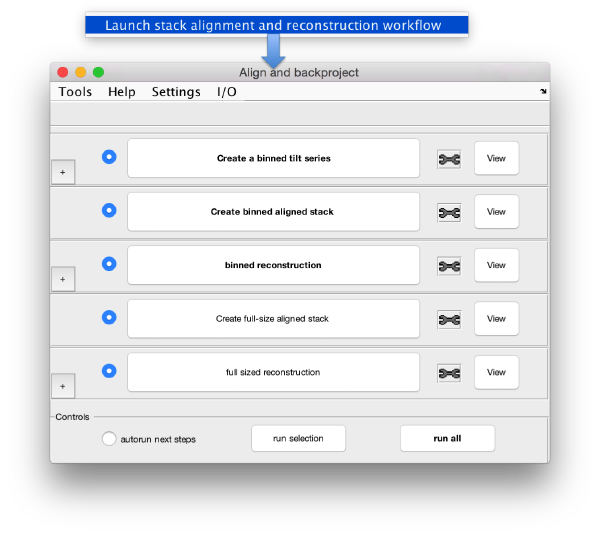 This GUI can be followed on a step by step basis. Completed steps will be shown in bold. Results produced by the computing step can be visualized through secondary-clicking of each view panel.

Reconstruction through the command line

If you have a set of markers saved in a file in disk, you can load it to memory through:

Then, you can create a fitter object:

This object needs to know where to put the rotation center of the aligned tilt series.

and prepare it to run with standard parameters:

will then compute the best psi angle for the rotation of the tilt axis together with the shifts. They can be gathered into an stack alignment object

that gets then applied onto the original tilt series in the variable ts.

This aligned stack can be visualized through:

A reconstruction with a bigger pixel size can be computed by resizing both tilt series and markers. A marker object can be resized through:

Here, the factor 2 indicates that the coordinates of the markers get halved twice. This factor needs to be applied also to the tilt series:

Now, we can refit the binned markers, proceeding as above:

To create a weighted back projection reconstruction, this stack needs to be weighted with a ramp function in the Fourier space.

Then, we can use the command dpktilt.math.backproject to create a reconstruction.

Here, the flag 'mw' is merely instructing Dynamo to use all available cores.

The reconstruction object fbp contains the reconstructed tomogram in its property .rec, which can be visualized through: