In this walkthrough, we use localized reconstruction to reconstruct a set of subtomograms at full pixel resolution without the requirement of creating a full reconstruction first. In this approach, we:

For the sake of simplicity, in this walkthrough, the landmarks of interest will be simply the gold beads, which are trivially recognizable both in tomograms and in projections in the tilt series.

The data set is an aligned tilt series. No filtering has been performed on it.

The aligned tilt series can be download with the command:

This will create a file called vc17_align.ali in your current working directory. The tilt angles go from -60 to 60 in intervals of 3 degrees.

The file can be brought into memory through the command

creating the variable ts (name has been chosen arbitrarily) which contains the tilt series as a numerical matrix.

The tilt series at full pixel resolution can be inspected by:

You will notice that inspecting the full series in dtmshow is bound to rather slow transitions. It is more convenient to bin the images to a smaller bin level. This can be done by switching on the binning radiobutton. Thus, the accessed slices will be binned on the fl when required.

Note that the coordinates of the axis are kept to the dimension of the unbinned tilt series.

Also, it is possible to create a prebinned version of the stack for different binning levels, so that the slice is accessed already in its prebinned dimension. This can be done after dtmshow has been initialized

In Dynamo, we call stack 3d center to a point (xsc, ysc,zsc) univocally defined by a stack of micrographs:

Creation of a binned reconstruction

We bin the original tilt series:

This command applies a binning of level two to the micorgraphs in the matrix ts separately. Note that the dimensions of the new matrix are floor( [sx,sy]/22<2>).

In this walkthrough, we use Weighted Backprojection as reconstruction algorithm. We apply here the simplest possible filter onto the original projections: a ramp filter.

As we have binned the tiltseries, a reconstruction at the full extent of the tomogram will fit easily in memory. We need to chose a size of the output tomogram, expressed in pixels of the stack By default, the center of the reconstructed volume will be located at the stack 3d center.

The reconstruction can be normally accessed through the field rec in the output.

tmshow on the reconstruction, z and x' views

In order to store this tomogram into a file, type:

The command dpktilt.math.backproject allows several modifications. The most used ones are:

Other than the final reconstruction, the output of the dpktilt.math.backproject command is an object that stores different information, including a description of the geometrical relationship between the reconstucted volume and the tilt series. We will use this information later in this walkthrough.

In actual practice, this reconstruction object can be saved into disk (as a binary file with extension .obp), so that the information on how a reconstruction relates to a given tilt series can be recalled in a later session. The command

will create a file called myInfo.obp in disk, whose contents can be brought later into memory through

For simplicity, we are skipping the CTF correction step in this walkthrough, where we are only interested in the geometrical manipulations. In a real case, you would just use a version of the tilt series where each micrograph has been phase-flipped according to a defocus estimation computed on the full micrograph.

We open it creating a catalogue on the fly to contain our annotations: 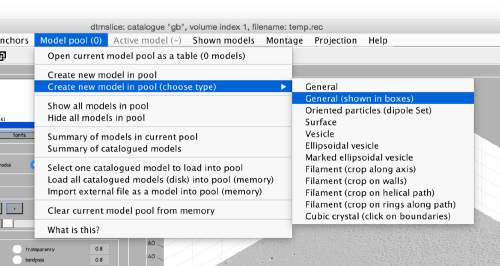 Boxes-type models are the most suitable for picking in 3D

The most trivial strategy for picking particles is to use the 3D viewer. Use C to input a 3d coordinate into the model. Further controls are explained here 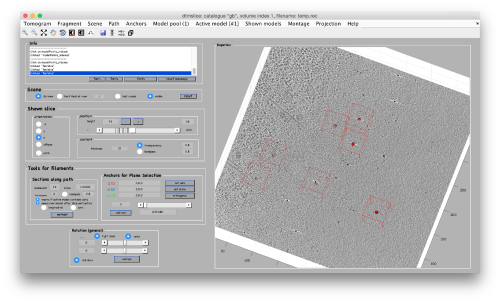 Note that you don't need to be very precise to catch the center of the gold bead. 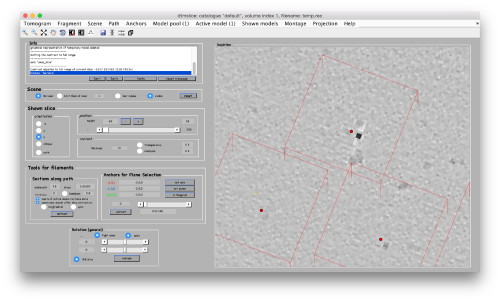 Gold beads can be selected approximately

An alternative way to quickly annotate the gold beads is by concurrent projection. In this approach we launch a projection view of the full tomogram [Project > project full shown fragment alongz z]. 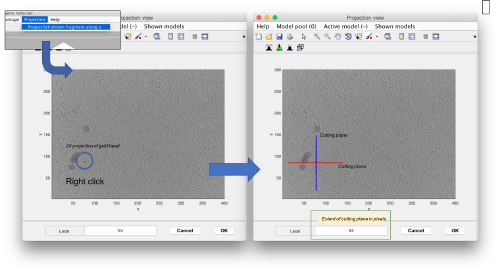 Location of a single gold bead in the total projection viewed along z. A right click (two-finger tap on the Mac) marks the x-y position

Two concurrent viewers will pop up showing cuts along x and y, i.e, YZ and XZ planes where the z coordinate can be clicked (in either of them). 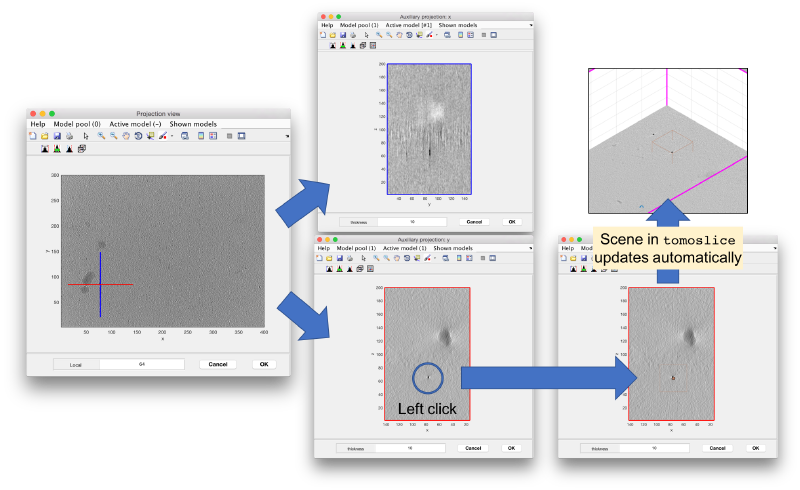 The (x,y,z) point will update in the tomoslice window. Also, the windows that show the cuts long x and y will update upon new right-clicks on the z projection.

On either way you chose to perform your annotations (by 3d or by concurrent 2d projections and cut), you can save your model in the catalogue with the disk icon or under the active model menu.

Now we want to localize the 3d coordinates of the gold beads in the binned tilt serie. We first bring the coordinates to a memory variable that we can manipulate. 'If your dtmslice is still open, you can put the points into the workspace memory by Active Model > Export to workspace > Points, which will create in the memory a variable called temp_points with Nx3 entries. In this variable, each row are the xyz coordinates of a single gold bead.

If you already closed the dtmslice session, you need to read the model that you saved into catalogue:

So, we have defined in memory a matrix Nx3 called gb. Each row is the 3d position of the center on one of the manually picked gold beads, expressed in the coordinates of the 3x binned reconstruction. You can check the geometry with low level depicting commands as dslice3d

which plots a single slice of the tomogram cutting a point of interest (by default, in direction z and covering the full extent of the volume), followed by a depiction of the 3d point of interest. For instance, for the first gold bead (in row 1) 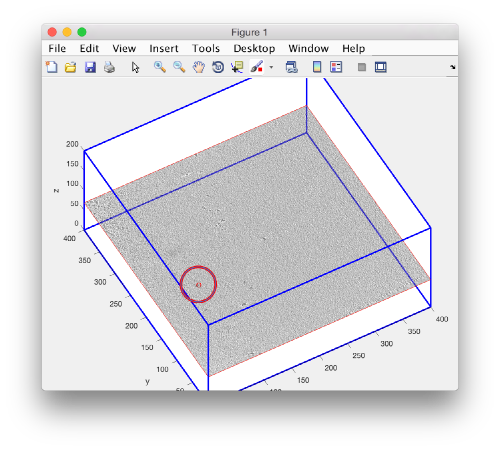 A different way to check it is to crop a subtomogram around the 3d coordinates of interest. For instance, for the second gold bead:

and show it as montage of slices with dview: 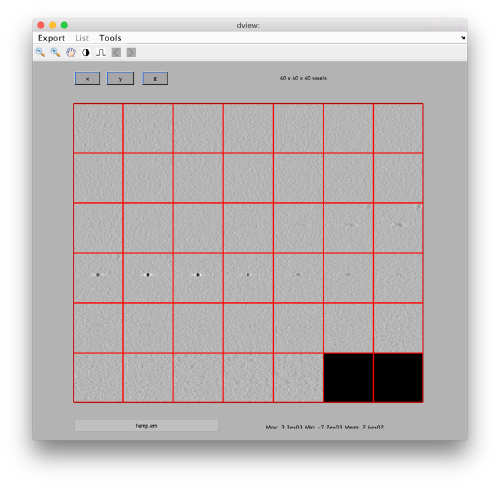 To find the 2d coordinates of all the goldbeads at once in the micrograph corresponding to a tilt angle of -60, we would write

Note that you need to express the geometric context of r3d.

In other words, gb are the coordinates of the points of interest in the reconstructed volume. You need to express how the reconstructed volume related to the original stack dpktilt.point3dInMicrograph needs this information explicitly. Alternatively, you can just use the method 'point3dInAlignedMicrograph' in the obp object, assuming it is still in memory. As this object carries the geometric information, the syntax is simpler.

or with the notation {} to pass position in the tilt series instead of the angle value.

So, did it work? You can check it by just plotting the image of the micrograph

and then plotting on it the positions of the markers.

Note that the default convention in dshow is to plot the rows of the matrix along the 'x' axis of the plot, with the origin of coordinates in the left bottom corner of the plot. The intensity of matrix entry [i,j] is represented in the pixel centered at (i-0.5,j-0.5).

The basic tool for visualizing sets of 2d markers defined on a tilt series is dmarkers. This allows to navigate at once through all the annotations on all the images. We first compute the positions in 2d of all the 3d positions in gb:

and then create a shape set object with this information. This step is necessary to provide dmarkers with the right format.

Now we can open the dmarkers GUI on the tilt series ts3 for this shape set:

dmarkers allow to slide along the projections. On the right, a zoom view (with the mouse wheel)

Remember that the gold beads had been picked loosely. If you zoom in, you'll see that the red spots are close to but not on the gold bead projections.

Now we want to reconstruct locally each of the gold beads, i.e. 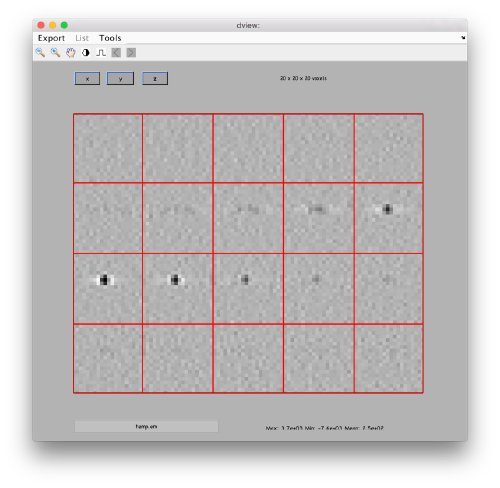 Reconstruction into a data folder

The command dtrec is the counterpart of dtcrop for tilt series. It loops on the positions inside a table. We will use a different approach. 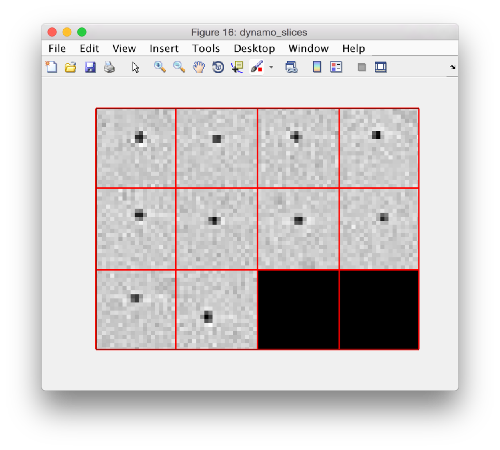 Now we can proceed to transport the locations annotated in the 3x binned geometry into the full size information.

We can apply the weight on the original tilt series at full resolution ts:

It will take around a minute. The function accepts the mw flag to increase the speed.

The localized reconstruction can be shown through: 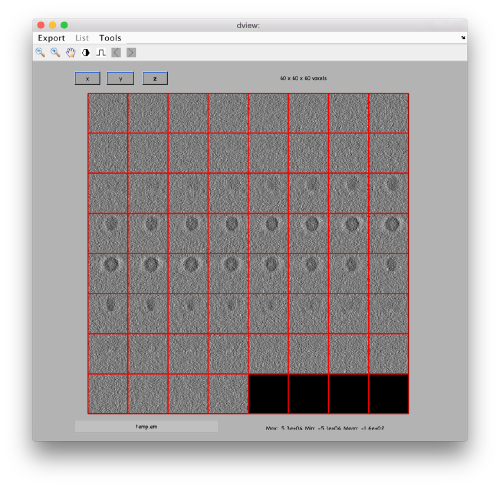 Note that we don't really need to use the object fgb as support. Its only role is to work out the geometry, computing the position of the 3d stack center with reference to the subtomogram that we want to reconstruct locally. We can work out the maths and compute the vector: [1035.431 551.378 318.140] . We could use this vector directly in dpktilt.math.backproject and get the same result.

We can now reconstruct all the gold beads at full resolution.

and create a depiction of the data set.

All gold beads, full resolution, compared to the reconstructions computed with the binned tilt series

Now, we could find the actual positions of the gold beads with an alignment project. We create a spherical template and mask:

If the check doesn't report any problem, we can then just unfold the project:

Then we can check the result. 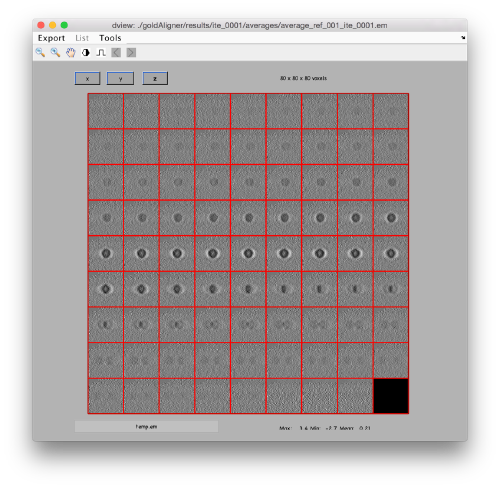 The alignment parameters are stored in the refinement table, which we can read into a workspace variable (we arbitrarily call it t)

The position of gold beads in 3d is the addition of the computed shifts (columns 4 to 6 in the table) on the coarse positions of the gold beads: 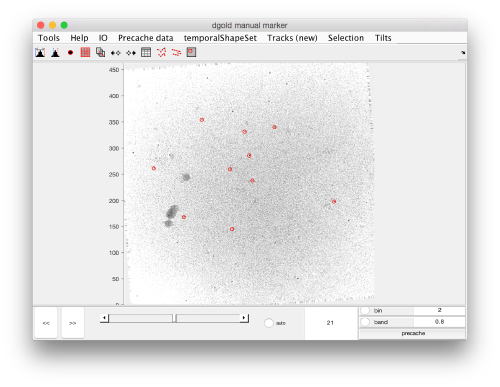 We can show in this session of dmarkers the same shape set of positions that we computed before the alignment project. We will paint it i blue for comparison with the current positions. 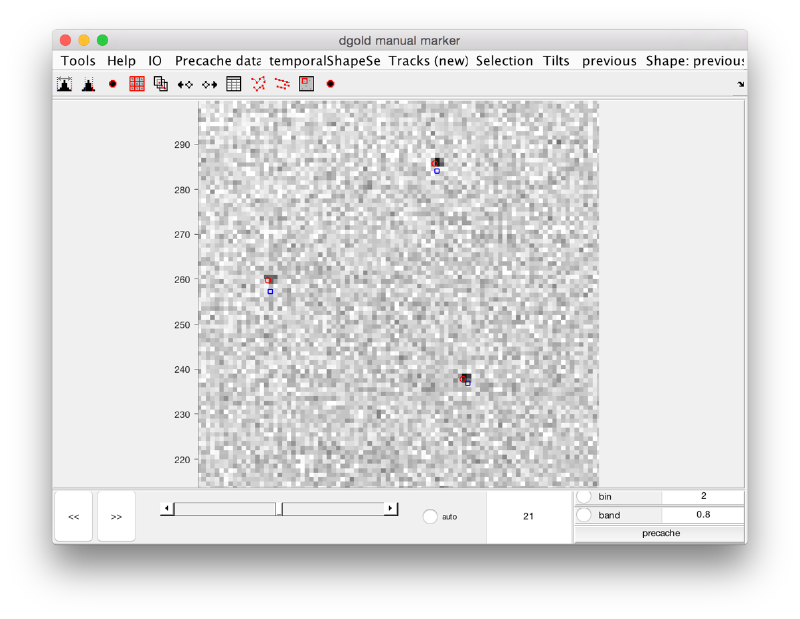